I. Sound buffer fix
The internal sound buffer is too small to hold the sound data to be played,
e.g. front end music, service park music, pace note calls etc.
From time to time this buffer is filled with more data than initially
allocated so memory located right after this buffer gets corrupted.
Depending on which object or data is located in the corrupted memory region
more or less strange things may happen, e.g. crashes or freezes.
So, this is where the patch applies. It convinces RBR to use a bigger buffer,
large enough to hold the sound data.

II. RBRDLL pace note editor and plugin loading fix
a) The pace note editor has some hard-coded values checking the stage number.
So only stages having numbers in the standard RBR range could be edited.
Generally this should be no problem, but as RBRDLL does not handle the
out-of-range stages correctly (Message: Error loading pace notes...) there are
crashes when loading the next stage. Here an internally allocated buffer is
freed twice which may work from time to time but often leads to crashes.
This patch removes that limitation and as a result, the related crashes.
b) On some machines starting the game via RBRDLL.exe may fail if the
tournament plugin RBRTM is installed due to some anti-cheat protection in the
plugin's initialization routine.
This patch fixes RBR's plugin loading routine to bypass RBRDLL's interference
so plugins are being loaded correctly again.

III. Setup slots and setup naming
The original RBR has a limit of 3 setup slots and restricts the name of a
setup to 10 characters.
This patch enhances the number of setup slots to 127 and allows for a setup
name to be 31 characters.
The dialogs to select or save a setup respectively have been enhanced to show
10 setups at once.

IV. Replay lists and replay naming
The original RBR limited the name of a replay to 13 characters.
This patch allows for the replay name to be entered when saving to be 31
characters in length.
The replay list dialog has been enhanced to show 20 replays at once, the name
column is much wider than before.

V. Service park
Due to an error in the implementation the 'Manager Advice' in the service park
didn't work as expected. Also the number of mechanics wasn't taken into
account properly. This patch fixes these problems.

VI. Aspect Ratio (Widescreen Support)
The original RBR uses a fixed 4:3 aspect ratio for drawing. On widescreen
hardware the objects drawn on screen get distorted due to the aspect ratio
being 16:9 or 16:10 (actually XRes / YRes).
This patch fixes the aspect ratio being used for drawing to be XRes / YRes.
Note: the dialogs (game menues) still get distorted, no proper way (and no
need) to fix that.
This fix may be disabled if you'd like to use other programs to fix the aspect
ratio (see "Configuration").

VII. Fullscreen Window
When running RBR in fullscreen mode the game uses the entire screen to draw
on, but you can't switch back to the desktop without screwing up the game.
When running RBR in windowed mode you always get the window decorations
(titlebar, menu icon, close button etc) surrounding the window, but would be
able to switch to another application.
This patch allows you to run RBR in fullscreen windowed mode without the
annoying window decorations. Switching to another application is then possible.
To use this new mode you have to configure "Fullscreen=false" in
RichardBurnsRally.ini.
This fix may be disabled if you'd like to use other programs to run in windowed
mode (see "Configuration").

VIII. Vertical Synchronization (V-SYNC)
The fullscreen window mode revealed a bug in the sound processing when v-sync
is disabled. Especially on tarmac there are weird tyre sounds, in service
park there is some strange noise as well.
This patch allows you to specify whether to set the v-sync mode and if v-sync
should be enabled (the default) or disabled (see "Configuration").
It is recommended to enable the fix and to enable v-sync for a better gaming
experience.
Note: this fix is independent of the Fullscreen Window fix. 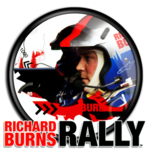 para quien no quiera loguearse os lo he subido yo aka el link: 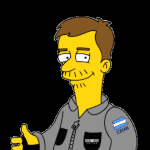